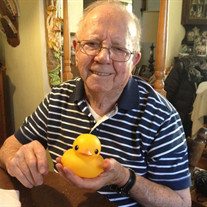 Thomas A. Piotrowski, age 90, a World War II veteran, avid gardener and lifelong resident of McKeesport, passed away peacefully on September 16, 2018. Tom was born November 16, 1927, to the late Louis and Josephine (Pasko) Piotrowski, Polish immigrants who settled in Liberty Borough. He grew up in the Christy Park district of McKeesport with his seven brothers and sisters and graduated from McKeesport Area Vocational Technical High in 1945. Tom was drafted into active service with the Army of the United States in 1946, serving in the 336th Ordnance Depot Company. He attended cook and mess sergeant school at Fort George G. Meade in Maryland. Tom also served in the Western Pacific Theater of Operations during World War II, as a mess hall cook in Manila, Philippines. He was promoted to Private First Class and awarded the Army of Occupation and World  War II Victory medals for his overseas service. Tom was honorably discharged in 1947 and returned home to McKeesport. He married Dorothy Frances Kolodziej, a fellow Christy Parker from the next street over, and the devoted couple had three children: Carol, Tom Jr. and Frank. Tom worked for more than 35 years at U.S. Steel National Tube Works in McKeesport, becoming senior physical tester. Tom enjoyed taking his wife and children on many summer vacations to Ocean City, Maryland and Myrtle Beach, South Carolina, where they often camped on the beach. He continued the tradition with his two granddaughters and loved early morning walks in Myrtle Beach. Tom never passed up a good meal and enjoyed spending many hours tending mini roses in his backyard garden. Tom is the husband of the late Dorothy and father of the late Frank. He is survived by his daughter, Carol (Michael) Sopko of White Oak; son, Thomas A. Piotrowski, Jr. of McKeesport; granddaughters, Jennifer Sopko, Michele Sopko (Derrick) Smith and Kelli Ann Piotrowski; sister, Sophie Bondi of Fox Chapel; and numerous nieces, nephews, great-nieces and great-nephews. He was also preceded in death by his brothers, Stanley, John and Louis Piotrowski; and sisters, Victoria Ploszay, Eleanor Sharik and Caroline Przywarty. Family and friends will be received on Tuesday, September 18, 2018 at Strifflers of White Oak Cremation and Mortuary Services, 1100 Lincoln Way, White Oak, 15131 from 2:00 until 8:00 p.m. Mass of Christian Burial will be held at 10:00 a.m. on Wednesday, September 19, 2018 at Corpus Christi Church, 2515 Versailles Avenue, McKeesport, 15132. Burial will follow in St. Mary’s Polish Cemetery.

The family of Thomas A. Piotrowski created this Life Tributes page to make it easy to share your memories.

Send flowers to the Piotrowski family.