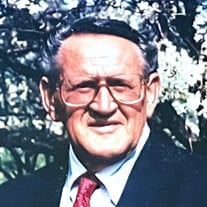 Thomas William Macko, age 91, died on Sunday, February 21, 2021 at Landis Homes in Lititz, PA. Born on March 7, 1929 in Homestead, PA he is the son of the late Andrew and Anna Copan Macko who both emigrated from Slovakia at a young age, and the husband of the late Rosemarie Klemens Macko. Tom and Rosemarie married three days after Christmas in 1954 so they could move together to Anchorage, Alaska for two years as he had been deployed by the US Army following the Korean War. While he was stationed in Alaska, he conducted infantry radio reconnaissance along the coast of the Bering Sea with Russia. Upon returning in 1956, Tom and Rosemarie moved to White Oak, PA and began to raise their family of five children, living on McKee Road for their entire lives. After nearly 30 years he retired as a manager of structural steel drafting from Bethlehem Steel and joined the firm Lake of Chicago to establish and manage their Pittsburgh branch, retiring for good when he turned 70. Tom was known for his dedication to community service through his church and catholic schools. He was the long-standing head usher for the 9:30 a.m. mass at St. Robert Bellarmine Church, he was the president of Serra Catholic High School SOS Club, the announcer for their Eagle football home games and the scorekeeper for the basketball team. He traveled with the teams and was an outsized presence at Serra for over 4 decades. For many years, he ensured that the McKeesport Daily News had all the statistics they needed to accurately report on the Serra teams’ results. Tom enjoyed gardening and caring for his yard, watching the Steelers, eating traditional Slovak food, and making his own homemade soups. During his retired years, he would travel to see his children and grandchildren at their homes for visits and the holidays, and spend summer vacations together at Rehoboth Beach, DE. His early days in the Army influenced the many sayings he would repeat for his grandchildren, his favorite being “Take all you want, but eat all you take.” He loved volunteering, his church, and his family. He is survived by daughters; Deborah (Lawrence) Contrella of Millersville, MD., Linda (Richard) Smiga of Lititz, PA, sons; Thomas (Jane) Macko of Allentown, PA, Timothy Macko of Sanibel FL, and Terence Macko of Washington, DC, and, grandchildren; Larry (Lauren) Contrella, Tara (Phil) DeLeonibus, Holly (Brandon) Harris, Blake Macko, Jon (Sarah) Macko, Evan Smiga and Rachel Smiga, and 6 great grandchildren; John Ryan, Charlotte Rose, Terence Frankie, Saylor Haven, Stormi Oak, and Thomas Gerard, sisters; Gerry Kollar of Glassport, PA and Maureen McCorkle of Los Angeles, CA. He was also preceded in death by his sister, Rosemarie Kruzek. Should friends desire, memorial contributions may be sent to Meals on Wheels or the White Oak Animal Safe Haven 2295 Lincoln Way, White Oak, PA 15131 where Tom would take his recycling to help raise funds. Family and friends will gather at Strifflers of White Oak Cremation and Mortuary Services, 1100 Lincoln Way, White Oak, PA 15131 (Sue Striffler Galaski, supervisor, 412-678-6177) on Saturday, February 27, 2021 from 11:00 a.m. until the time of services at 1:00 p.m. Entombment will follow. The family and our team members appreciate that all visitors follow the current CDC guidelines including wearing of masks, social distancing, and capacity limits. We thank you for your cooperation and understanding. To share a memory or condolence, visit strifflerfuneralhomes.com

Thomas William Macko, age 91, died on Sunday, February 21, 2021 at Landis Homes in Lititz, PA. Born on March 7, 1929 in Homestead, PA he is the son of the late Andrew and Anna Copan Macko who both emigrated from Slovakia at a young age, and... View Obituary & Service Information

The family of Thomas William Macko created this Life Tributes page to make it easy to share your memories.

Send flowers to the Macko family.