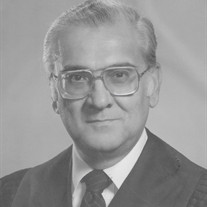 Nicholas P. Papadakos, retired Justice, Supreme Court of Pennsylvania, age 92 of McKeesport, died Monday, September 11, 2017. Born January 24, 1925, in Hoboken, New Jersey, son of the late Reverend Petros M. Papadakos and Presbytera Olga Christopoulou Papadakos, he served as a Sergeant in World War II, Honorably Discharged in 1946, and was the recipient of four Bronze Star medals. Upon completion of his education (BA from Dickinson College in 1949 and Law Degree from Catholic University in 1952) he was admitted to the practice of law in Washington, DC and Pennsylvania.  He served as solicitor to various municipalities and was elected to the Court of Common Pleas of Allegheny County in 1975, serving in the Criminal Division and as Administrative Judge of the Civil Division until 1983 when he was elected as a Justice on the Pennsylvania Supreme Court, where he served until his retirement in 1995. Eager to give back to his community and proud of his faith, culture and heritage, he served in many capacities at local, regional, national and international levels, being richly recognized for his service by his colleagues in the legal community and by many social, educational and Hellenic organizations and the Greek Orthodox faith community.  An Archon of the Order of St. Andrew, an honor bestowed by the Ecumenical Patriarch of Constantinople and his title “Ekdikos” is in recognition of his lifetime accomplishments, dedicated to defending human rights and the rule of law. Justice Papadakos is survived by his beloved wife of 67 years, Stavroula Sakellariou Papadakos; sons, Peter Clyde Papadakos, Esq. of McKeesport, James N. (Diane) Papadakos of Boston, MA and Thomas N. Papadakos, Esq. of Pittsburgh; grandchildren, Nicholas J. (Jasmine) Papadakos, Elena Stavroula Papadakos and Joseph Thomas Papadakos. He was preceded in death by his siblings, Michael (Kay) Pappas, George (Jeannette) Pappas, Thomas P.  Papadakos and Lulu (Evan) Angelou. Family and friends will gather at the Annunciation Greek Orthodox Church, 1128 Summit Street, White Oak, 15131 on Thursday Sept. 14, 2017 from 4:00 pm until 8:00 pm. (There will be a Trisagion Service at 7:00 pm) and again on Friday September 15, 2017 from 10:00am until 11:00 am.  Services will be at the church at 11:00 am with Metropolitan Savas of the Greek Orthodox Metropolis of Pittsburgh officiating, assisted by Rev. Father William Zotis and area clergy. Entombment will follow in McKeesport and Versailles Cemetery.  Arrangements by Striffler’s of White Oak Cremation and Mortuary Services, Inc. (412-678-6177).    Remembrances may be made to the Annunciation Greek Orthodox Church, 1128 Summit St., White Oak, PA 15131 or the American Heart Association, 444 Liberty Avenue, Suite 1300, Pgh., PA 15222.  Condolences may be made at www.strifflerfuneralhomes.com

The family of Nicholas P. Papadakos created this Life Tributes page to make it easy to share your memories.

Send flowers to the Papadakos family.