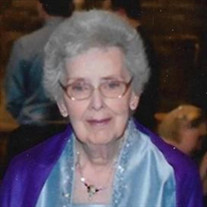 May B. Pelar, age 90, of Port Vue, died Thursday, April 23, 2020. She was born in Chicago, IL on Oct. 8, 1929 and is the daughter of the late John and Edna McFarland Busch and the wife of the late John E. Pelar, Sr. May was employed at the former GC Murphy Office in McKeesport until she had her family. When the children were older, she volunteered at McKeesport Hospital a couple of days a week. When the children were grown, she took a paramedic course at the local community college and then volunteered in Green Tree and served as secretary of the Port Vue ambulance service and was a member of the Auxiliary. Once her husband, John, retired they both worked part time as cashiers at Kennywood Amusement Park for many years then eventually both went to work for AMC Lowe’s Theater in the Waterfront. She is survived by children, Cindy (James) Gallaher of Wexford, Susan Cralle of Cocoa, FL, John “Jack” (Colleen) Pelar of Springfield, VA, and James (Neda) Pelar of San Clemente, CA; grandchildren, Darren and Ryan Gallaher, Justin, Kyle, Brandon and Joseph Pelar, and Alena McIntosh; great-grandchildren, Delanie and Mack Gallaher. A family gathering was held Saturday, April 25, 2020 at Strifflers of White Oak Cremation and Mortuary Services, 1100 Lincoln Way, White Oak, PA 15131 (Sue Striffler Galaski, supervisor, 412-678-6177). Entombment followed. To share a memory or condolence, visit strifflerfuneralhomes.com

The family of May B. Pelar created this Life Tributes page to make it easy to share your memories.

Send flowers to the Pelar family.