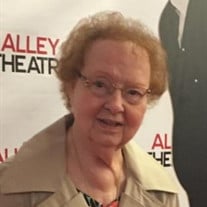 Marjorie Peebly (Margie) Bauer, 88, of Alvin, Texas, formerly of Versailles, Irwin, White Oak, and McKeesport, PA, went to be with the LORD on Saturday, January 30, 2021. She passed away in HCA Healthcare – Clear Lake Regional Medical Center, Webster, TX. She was the daughter of the late Harry Lindsley Peebly and AnnaBelle (Nolder) Peebly Jones. Born March 13, 1932, she was born and raised in McKeesport’s 10th Ward. She was the wife of Thomas R. Bauer, who died February 21, 1990. In addition to her parents and husband, she was preceded by her brothers and their spouses: Jack W (Emma) Peebly; Chester H. (Margaret) Peebly; Don B. (Wilhemina, Josephine) Peebly; and Ramon L. Peebly; and nephews Chester Peebly II and Marty Peebly. A graduate of McKeesport High School, for over 30 years she was employed at the Dravosburg office of the (former) State Bank of Dravosburg/Western PA National Bank (WPNB)/Equibank/ National City – now PNC Bank. Late in her career, she transferred to the Monongahela and McKeesport offices, before retiring. She was a member of PA Grand Chapter - Order of Eastern Star, Chapter 316; and a lifelong member of West Side United Methodist Church (WSUMC). She served as WSUMC’s Treasurer for over 20 years, besides other church committees, offices, and participated in other functions. During the 1960’s, she was the Liberty Borough Presbyterian Church choir director. Since 2002, she had become the “matriarch” of her family and was very close to her sisters-in-law, her nieces and nephews and their families, and her “other family,” the WSUMC. Margie loved to eat out and send birthday and greeting cards to her family and friends She is survived by her son, Eugene R. Bauer of Alvin, TX; sisters-in-law: Mabel Bauer of McKeesport, PA; Mary (Jean) Conn of White Oak, PA, Mary Jane Bauer of Angola, IN, and Elaine Jackson of Irwin, PA, and numerous nieces and nephews. Services will take place tomorrow, Saturday, September 25, 2021 at 2:00 pm at the West Side United Methodist Church, 307 Atlantic Avenue, McKeesport, PA 15132. Burial will be in Round Hill Cemetery. Local announcement by Strifflers of White Oak Cremation and Mortuary Services, 1100 Lincoln Way, White Oak, PA 15131 (Sue Striffler Galaski, supervisor, 412-678-6177). Should friends desire, memorial contributions in Marjorie’s name may be made to the West Side United Methodist Church, 307 Atlantic Avenue, McKeesport, PA 15132.

The family of Marjorie Bauer created this Life Tributes page to make it easy to share your memories.

Send flowers to the Bauer family.