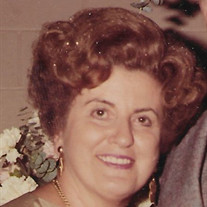 Margaret “Peg” Hipple, age 89, of Dravosburg, died Sunday, June 18, 2017.  She was born in Clairton on August 24, 1927 and was the daughter of the late Stephen and Mary Patrick Cundra.  She was preceded in death by her husband of 43 years, Philip R. Hipple.  She was the owner and partner of Grayson’s Florist in Dravosburg for 55 years with her sister, the late Mary Grayson.  She was also a  member of Dravosburg Methodist Church. She is survived by her daughter, Sandra (the late Greg) Limley of Dravosburg; son, Charles (Regina) Hipple of Glassport; grandchildren, Marisa Limley, Charles, Philip R. Hipple II, and Beth Ann Hipple; 5 great-grandchildren; and many nieces and nephews.  She is also preceded in death by her son, Brian Hipple; sisters, Anne Messner (the late  Donald) and Mary (the late William) Grayson; brothers, Stephen, John and Michael Cundra. Friends and family will be received on Wednesday, June 21, 2017 from 2:00-4:00 pm and 6:00-8:00 pm at Strifflers of Dravosburg/West Mifflin, 740 Pgh-McKeesport Blvd., Dravosburg, PA  15034 (412-678-6177).  Services will be held Thursday, June 22, 2017 at 10:15 am with Father Greg Madeya officiating. Burial will follow.

The family of Margaret "Peg" Hipple created this Life Tributes page to make it easy to share your memories.

Send flowers to the Hipple family.