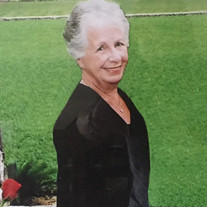 Lorraine Marie Hays Zajicek, age 94, of McKeesport died on Monday, January 23, 2017. She was born in McKeesport on August 10, 1922. She was preceded in death by her husband of 67 years, Carl J. Zajicek, and was the daughter of the late Clifford R. and Lillian Dietrich Hays, stepdaughter of Lillian McMarlin Hays, and granddaughter of Rose and Robert Hays. She worked at USS Christy Park Works and later retired from Penn State University. She was an avid duplicate bridge player and gardener, and marched as one of the first four Majorettes at McKeesport High School. She was a member of the former St. Pius Church, a former member of the McKeesport Garden Club, and the Morning Glory Bridge Club. She is survived by her children, Sharon (James) Maher of North Rose, NY, Karen (Robert) DeVos of Boynton Beach, FL, Karl (Denise) Zajicek of Pittsburgh, and Michelle (Gary) Trbovich of Elizabeth Twp.; grandchildren, Kelly Maher of Metarie, LA, Sean (Nicole) Maher of Incline Village, NV, Lisa (Shawn) Luttenauer of Boynton Beach, FL, Corrine Zajicek of Winston Salem, NC, Alexander Trbovich of Elizabeth Twp.; and great-grandchildren, Caitlin Roberts, Tyler Luttenauer, and Chase Luttenauer. At the time of her death she resided at Mt. Vernon of Elizabeth Senior Living, and was in the loving care of Three Rivers Hospice. Friends and family will be received at Strifflers of White Oak Cremation and Mortuary Services, Inc., 1100 Lincoln Way, White Oak, PA 15131 (Sue Striffler Galaski, Supervisor, 412-678-6177), on Friday January 27th from 2 pm until 8 pm. Services will be held on Saturday January 28th in the funeral home chapel at 9:00 AM with Father Thomas Wagner officiating. Burial will follow in McKeesport and Versailles Cemetery. Remembrances may be made in Lorraine’s name to Alzheimer’s Association, 1100 Liberty Avenue, Suite E-201, Pittsburgh, PA 15222. Condolences may be made at www.strifflerfuneralhomes.com

Lorraine Marie Hays Zajicek, age 94, of McKeesport died on Monday, January 23, 2017. She was born in McKeesport on August 10, 1922. She was preceded in death by her husband of 67 years, Carl J. Zajicek, and was the daughter of the late Clifford... View Obituary & Service Information

The family of Lorraine Marie Hays Zajicek created this Life Tributes page to make it easy to share your memories.