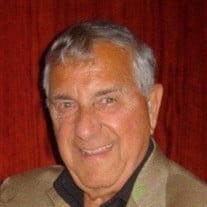 Leonard “Leo” Joseph Puma, age 94, of McKeesport and West Palm Beach, Florida, died Sunday, November 3, 2019.  He was born in Lorain, Ohio on March 18, 1925 and is the son of the late Samuel and Rose Marino Puma.  He served in the U.S. Navy during WW II and received honors for his service. He was a member of St. Patrick Church in McKeesport.  He was a retired member of Iron Workers Local #3 for 71 years and was elected and served as President for 12 years.  He then was the Business Manager for the Pittsburgh Building Trades for the following 12 years.  He was an accomplished Union Rights activist and devoted much of his life to the cause. After retirement, he was a PA State Constable.  He was a member of the former McKeesport Elks Club, the Eleventh Ward Club, the Italian Heritage Society, the Renzie Seniors and the White Oak American Legion. He was a devoted family man and is survived by his loving wife, Ruth Ann Vallus Puma; son, Mark (Harriet Walsh) Puma of North Huntingdon; daughter, Lisa Puma of Alexandria, Virginia; grandchildren, Nicole and Gianna Puma; sister, Josephine Shaw of Lorain, Ohio.  He is preceded in death by his brothers, Nicholas and Charles Puma. Family and friends will be received at Strifflers of White Oak Cremation and Mortuary Services, Inc., 1100 Lincoln Way, White Oak, PA 15131 (Sue Striffler Galaski, Supervisor, 412-678-6177), on Wed., November 6, 2019, from 5:00 until 8:00 p.m. Services will be held in the funeral home chapel on Thursday, Nov. 7, 2019, at 10:00 a.m. Burial with military honors will follow.

The family of Leonard Joseph "Leo" Puma created this Life Tributes page to make it easy to share your memories.