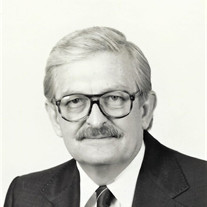 Joseph C. Janke, age 93, of White Oak, died Sunday, September 23, 2018. He was born on Christmas Eve in 1924 and is the son of the late Edwin and Anna Campbell Janke. He is survived by his wife, Lois Beckman Janke; daughters, Janette (Lance) Ellenberger and Jennifer (Mark) Sargent, both of White Oak; grandchildren, Jessica Janke (Jonathan) Patterson, Lance Ellenberger, Paige Ellenberger, and Cristina Sargent and great grandchild, Jayci.  Retirement does not necessarily mean retirement from ones professional activities. There is obviously more time for leisure, fun and games. There is also time for continuing ones professional skills. In Joseph Janke’s case his retirement years were complete with volunteer activities both in Pennsylvania and in the state of Florida.  After 35 years’ service, Mr. Janke retired in 1985 from WABCO Corp. (now knows as WABTEC Corp.) as Vice President of Marketing. He also held the title of Vice President International for the Railroad Products Group of American Standard Corp., at that time the parent corporation of WABCO. Prior to these assignments, Mr. Janke served as Manager of Engineering, Manager of Business and Product Planning and a number of lesser positions. He was a graduate in Mechanical Engineering from Grove City College and the Program for Executives at Carnegie Mellon School of Industrial Administration. Mr. Janke served in WWII as a navigator on a B-17 based in England. During the time of his early business career he served two terms (8 years) as Councilman in White Oak Borough. His responsibility was Chairman of the Recreational Committee and was largely responsible for the early development of Heritage Park, in particular, its world class swimming pool. Mr. Janke was a member of East McKeesport F&AM Lodge No. 765.  Shortly after retirement, he became active in SCORE (Service Corps of Retired Executives). SCORE is a volunteer organization sponsored by the Federal Small Business Administration. Its charter is to assist persons starting a new business and advising current small businesses to help in the areas of marketing, finance, manufacturing, etc. One of the most important parts of counseling is helping the client prepare a business plan when they are looking for a loan. As a SCORE member, Mr. Janke served on the Board of Pennsylvania Northwestern Development Corporation. At the time, the charter was to direct low interest loans for new and expanding businesses that showed promise of succeeding and providing new employment.  In 1989, Mr. Janke moved to Leesburg, Florida into a resident owned retirement community know as Hawthorne, He continued his activities in SCORE serving as Chapter President, in addition to serving on various committees. He also served on the Hawthrone Board of Directors for two 3 year terms as Treasurer and Chairman. In December 2004, Mr. Janke and his wife returned to White Oak to spend his remaining senior years closer to family. On the lighter side, he said his golf game got worse and the fish quit biting.  Mr. Janke is preceded in death by his former wife, Hilda Ziegenfuss Janke, and his sons, Joseph and Jeffrey Janke. Friends and family will be received on Sunday, September 30, 2018 at Strifflers of White Oak Cremation and Mortuary Services, Inc., 1100 Lincoln Way, White Oak, PA 15131 (412-678-6177) from 1:00 pm until 5:00 pm. Service will be held on Monday, October 1, 2018 at Faith Lutheran Church, 1656 Lincoln Way, White Oak, PA 15131 at 10:00 am. Reverend Michael Ryan will officiate and burial will follow. Remembrances may be made to Faith Lutheran Church. Condolences may be made at www.strifflerfuneralhomes.com.

Joseph C. Janke, age 93, of White Oak, died Sunday, September 23, 2018. He was born on Christmas Eve in 1924 and is the son of the late Edwin and Anna Campbell Janke. He is survived by his wife, Lois Beckman Janke; daughters, Janette (Lance)... View Obituary & Service Information

The family of Joseph C. Janke created this Life Tributes page to make it easy to share your memories.

Send flowers to the Janke family.