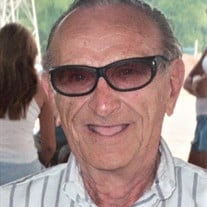 Joseph Gdovic, 91, of McKeesport, Pennsylvania died Saturday, April 20, 2019. He was born in Port Vue, Pennsylvania on January 19, 1928. He is the son of the late Michael and Anna (Koval) Gdovic. He is preceded in death (2002) by his wife Angelina... View Obituary & Service Information

The family of Joseph Gdovic created this Life Tributes page to make it easy to share your memories.

Send flowers to the Gdovic family.