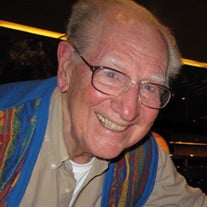 John “Jack” Malcolm Francis MacDonald, age 92, of Elizabeth Twp., died Monday, October 21, 2019.  He was born in McKeesport on December 24, 1926 and is the son of the late Archibald John and Elizabeth Kraus MacDonald.  He was a graduate of Mercersburg Academy and Franklin and Marshall College and was a veteran of World War II serving on active duty in the Philippines and Japan.  He retired in 2011 after 56 years in the financial services industry with McKelvy & Co. which later merged with Parker/Hunter Inc. and then Janney Montgomery Scott, LLC.  A certificate of recognition was presented to him by Parker/Hunter Inc. on September 19, 2005 for 50 years of dedicated service.   Formerly he was a Senior Vice President, a member of the Board of Directors and a trustee of the ESOP Fund at Parker/Hunter Inc. before they were purchased by Janney Montgomery Scott.  He was a member of the Board of TRC Companies, Inc. from 2001 to 2008, and was a board member of several privately held companies.  He was a member of the Board of Directors of McKeesport Hospital (now University of Pittsburgh Medical Center – UPMC McKeesport) from 1974 to 2003.  He then became a member of the McKeesport Hospital Foundation from 2003 to 2017.  He was also a member of the following: President of the Mon Yough Area Industrial Development Corporation; the McKeesport Industrial Development Authority; the Mon Yough Chamber of Commerce; the McKeesport Rotary Club; the Board of Directors of the Girl Scouts of Southwestern Pennsylvania where he served on the Finance Committee and Investment Committee; White Oak Borough Council for eight years and President of Council for six years; Founding Board Member of the Landmark at Hillsboro Condominium Association in Hillsboro Beach, Florida, where he served on the Board as a Member and Treasurer for many years; and Trustee of the Dr. Frederick A. Prescott Medical Scholarship Fund.  Jack and Joan loved to travel and had visited at least 70 different foreign countries.  They also enjoyed planning trips with both their immediate family and extended family. He is survived by his loving wife of 63 years, Joan Rotheram MacDonald; children, Elizabeth Cora (the late Gregory) Stoner of Sandpoint, Idaho, John Edward (Laurie) MacDonald of Rockwood, Pennsylvania and Dr. Laurie Joan (Franz Georg Festag) MacDonald of Blue Bell, Pennsylvania; grandchildren, Cora Stoner (Curtis) Johnson of Sandpoint, Idaho, Todd Gregory Stoner of Bozeman, Montana, John Zacharia MacDonald and Douglas Francis MacDonald both of Pittsburgh, Pennsylvania; great granddaughters, Charlotte Cora Johnson and Emerson Scott Johnson. Family and friends will be received at Strifflers of White Oak Cremation and Mortuary Services, Inc., 1100 Lincoln Way, White Oak, PA 15131 (Sue Striffler Galaski, supervisor, 412-678-6177), on Wednesday, Oct. 23, 2019 from 5:00 until 7:00 pm and Thursday, Oct. 24, 2019 from 3:00 until 7:00 pm.  Services will be held Friday, Oct. 25, 2019 at 10:00 am at the funeral home chapel.  Burial will follow at Mt. Vernon Cemetery.  Remembrances may be made to the McKeesport Garden Club, 1400 Pin Oak Dr., McKeesport, PA 15132.  To share a memory or condolence, visit strifflerfuneralhomes.com.

The family of John Malcolm Francis "Jack" MacDonald created this Life Tributes page to make it easy to share your memories.