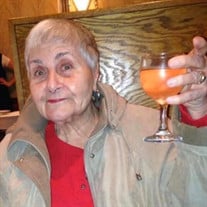 Joanne Nadine Sekowski, age 91, of West Mifflin, died peacefully on Wednesday, March 11, 2020. She was born in Altoona, PA on January 8, 1929, the only child of the late John and Eleanor Cassidy Aites. She told stories of living in tents with her parents during the Great Depression. She was Native American (Seneca Tribe), Irish, and Patriotic to the core. Her home is filled with American Indian memorabilia, shamrocks, and American flags. She was lucky enough to be loved deeply by two men during her lifetime. Her late husband, Thaddeus “Ted” Sekowski who died in 1977 and after that, her companion, Herbert “Herb” Rink who died in 2007. The only other man she had eyes for was Alex Trebek, but alas, he never knew. Jeopardy was the only show she watched. A devout Catholic, Joanne was dedicated to the Blessed Mother for the first 10 years of her life and had a strong devotion to Our Lady. She prayed thousands of rosaries while she was living, and friends and family were blessed by her many prayer intercessions. If there was a Saint for what was ailing you, she knew who it was! Her favorite intercessors were Our Lady of Good Success and Mary Undoer of Knots. She spent her working life waiting tables and truly loved her job. She would tell you she was the best waitress Pittsburgh has ever seen and that would not be a lie. Patrons of Palmer’s in the Gulf Building and the Plaza Restaurant in Forest Hills knew and loved her as “OH MISS” a moniker she had made for her nametag. Because of the exemplary service she gave, she expected the same in return when she went out to eat. Now that she is gone, servers at Denny’s and Eat ‘n Park are breathing a sigh of relief because they don’t have to worry anymore about their coffee being hot enough. Joanne was preceded in death by her daughter, Dawn Otto of Perkasie, PA. She is survived by her oldest daughter, Kathleen Dugan of Monroeville, PA and her son, Francis (Buddy) Sekowski of Duquesne, PA. She was especially proud of her 8 grandchildren, Kim Treloar, Roberta Gombita, Chad Baldosky, Robert Baldosky, Todd Sekowski, Ryan Sekowski, John Otto, and Richard Otto and lived a life long enough to be blessed to see them become parents to her 16 great grandchildren, Joseph Gombita, Keegan and Shane Treloar, Kody, Miranda, Brianna and Michael Baldosky, Todd J., Tiana, Ryan Jr. and Rylie Sekowski, Griffin, Justin, Devin, Nina and Ryan Otto, all who she loved dearly. As a young girl, Joanne dreamed of being a singer and won a radio contest when she was 12 years old with the song “I’m Stepping Out with a Memory Tonight.” While she never realized her dream, she did get to live it vicariously through one of her great grandsons and traveled to many places to see him perform. It was fitting that in her last days, she sang that long-ago song for him. Special thanks to Elaine Bixler of West Mifflin PA, her life-time friend who also took on the role as her caregiver when necessary. The family is also thankful for her neighbors, June and Carly, who looked after Joanne when we were unable to. She loved all of you! Caring Hospice of Monroeville made Joanne’s last few months happy ones. We are forever grateful for the tremendous care and kindness you showed her. Thank you, Margie, Sue, Jennifer, Brittany, and Pastor Dave. Her face lit up when she talked about all of you. And a big shout out to Jim from Southwestern PA Area Agency on Aging. You made the best grilled cheese Joanne ever had! Family and friends will gather at Christ the Light of the World Parish, Holy Name Church, 32 S. 1st Street, Duquesne, PA 15110 for a Mass of Christian Burial on Tuesday, March 17, 2020 at 10:00 am. Procession to cemetery will follow. Arrangements by Strifflers of White Oak Cremation & Mortuary Services, 1100 Lincoln Way, White Oak, 15131 (Sue Striffler Galaski, supervisor, 412-678-6177). To share a memory or condolence, visit strifflerfuneralhomes.com.

Joanne Nadine Sekowski, age 91, of West Mifflin, died peacefully on Wednesday, March 11, 2020. She was born in Altoona, PA on January 8, 1929, the only child of the late John and Eleanor Cassidy Aites. She told stories of living in tents with... View Obituary & Service Information

The family of Joanne Nadine Sekowski created this Life Tributes page to make it easy to share your memories.

Send flowers to the Sekowski family.