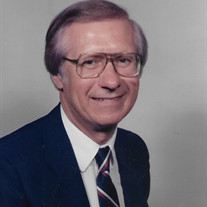 Jerome M. Adams of Jefferson Hills died peacefully on October 20, 2017 married to his loving and devoted wife Betsy Auten Adams for 58 years. He is survived by his two sons, Joseph A. Adams of Pleasant Hills and Mike Adams of Jefferson Hills, along with three grandchildren Natalie, Ashley Marie, and John Michael Adams.   Born September 10, 1931, in McKeesport he was the son of Paul J. and Mary Arendas Adams. He is predeceased by his two brothers Paul Adams and Edmund Adams. Mr. Adams was a respected lawyer in the Mon Valley practicing his entire career in the McKeesport area. He began in the early 1960’s at the law firm Liddle & Adams and successfully led successor firms bearing his name. Mr. Adams served on numerous boards and commissions throughout his lengthy career including past chairman of the McKeesport Parking Authority; charter member of the Mon-Yough Chamber of Commerce Foundation; director of the Mon-Yough Chamber of Commerce, McKeesport YMCA, McKeesport Salvation Army Advisory Board, White Oak Athletic Association; and special counsel to the Mon-Yough Bridge To Recovery. Mr. Adams also distinguished himself as a long-serving bank board director beginning with McKeesport National Bank, Three Rivers Bank, and U.S. Bancorp in Johnstown, Pa. (now AmeriServ Financial, Inc.). “Jerry” Adams as he was known was a basketball standout at McKeesport High School playing for the legendary coach “Neenie” Campbell for whom the gymnasium was named. There he made lifelong friends and played on some of the winningest teams in school history. Jerry was fortunate to earn a full scholarship to Hampden-Sydney College in Virginia. There he was a four-year starter and remains to this day one of the leading scorers in school history. His accomplishments were recognized by his induction into the Hampden-Sydney Sports Hall of Fame. After graduating from Hampden-Sydney, Jerry entered military service during the Korean conflict and was honorably discharged as a sergeant in the United States Army. Thereafter, he received dual graduate degrees from the University of Richmond in Virginia. After receiving a masters degree in education he taught and coached high school basketball in Richmond. He then earned a juris doctorate degree before returning home to Pittsburgh to practice law. Mr. Adams has been a member of St. Thomas A Becket parish in Jefferson Hills for the past 45 years. Jerry loved his family, his dogs, reading, daily exercising and golf. Friends will be received at Striffler’s of White Oak Cremation and Mortuary Services, Inc., 1100 Lincoln Way, White Oak, PA 15131 (Sue Striffler Galaski, supervisor, 412-678-6177) on Wednesday October 25th from 2-4 pm and 6-8 pm. Mass of Christian Burial will be held on Thursday October 26th at 10 am at Saint Thomas A’ Becket Church, 139 Gill Hall Rd, Jefferson Hills, PA 15025, with Father Daniel Maurer officiating. Burial will follow. Remembrances may be made to Emily’s Foundation P.O. Box 18224 Pittsburgh, Pa. 15236, benefitting children’s literacy. Condolences may be made at www.strifflerfuneralhomes.com

The family of Jerome M. "Jerry" Adams created this Life Tributes page to make it easy to share your memories.