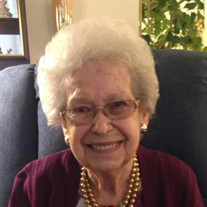 Geraldine “Gerry” Jeannette Sabol, age 96, of McKeesport, PA, died March 11, 2020. She was born in Kissimmee, Florida on March 7, 1924 and is the daughter of the late Samuel Earl and Rose Elizabeth Brownell Kallenbaugh and the beloved wife of the late Elmer V. Sabol. Her family moved to Glassport where she graduated from Glassport High School in 1942. Married to Robert J. Watts, Jr. on August 1, 1941 in Cumberland, Maryland, then resided in Glassport until he was drafted into the Army in 1944. He was killed in action on November 8, 1944. During WWII, she worked at the Christy Park Plant as a secretary in the engineering department. She then worked as secretary to the President of Firth Sterling in Glassport where she remained until she married Elmer V. Sabol in 1950. She later served as Secretary and Treasurer of the family business Silver Star Vending. They lived in Port Vue, where they raised three children, Stephen W. (Lea Keeney) Sabol of Port Vue, PA, Rosemary J. (Christopher L. Uziel) Sabol of McKeesport, PA and Mark E. (Carol Wagner) Sabol of West Brownsville, PA. Gerry converted to Catholicism, because of the superb example of faith set by her husband Elmer. Gerry was very active in the community as a member of the former St. Joseph Parish and its’ Christian Mothers, the Mon Valley Boat Club Ladies Auxiliary, Port Vue Women’s Club, McKeesport Hospital Junior Committee and a Campfire leader. She was also an excellent seamstress. As her children reached high school, she was very active as a volunteer with Divine Redeemer Academy and Serra Catholic High School. She was also a member of Pittsburgh Garden Center and studied horticulture at Phipps Conservatory under Frank Kurta. She was always proud of her yard and the huge variety of plants that she kept beautifully maintained. Gerry moved from Port Vue at the age of 92 to Redstone Highlands in North Huntingdon and most recently has resided with her daughter, Rosemary in McKeesport. In addition to her parents and husband, she was preceded in death by her in-laws Mary and Stephen Sabol, sisters Verda Lees Tolbert, Thelma Pullin, Ethel Werner, and Earlene Stephen Snyder. She is survived by her children, her daughter-in-law Cindy (Bernie) Pucka of Plum Boro, PA, granddaughters Sarah E. (Jon) Duboy of White Oak, PA and Amanda (Jason) Shipley of Ruffsdale, PA; great-grandchildren, Marek Krol and Ivanka Krol; many nieces and nephews; and great nieces and nephews all of whom she loved dearly. Gerry spent many years caring for the feral cats that just showed up on her doorstep. She not only took care of them but found homes for 64 kittens over the years and provided vet care along with spay and neuter. We are asking that in lieu of flowers that memorial contributions be sent to the Homeless Cat Management Team at 207 Allegheny Street, Tarentum, PA 15084 or Frankie’s Friend Cat Rescue 730 5th Ave., New Kensington, PA 15068. Special thanks to Letha Nakutis, her loving friend and caregiver and the staff from Three Rivers Hospice. Family and friends will be gather at Strifflers of White Oak Cremation & Mortuary Services, 1100 Lincoln Way, White Oak, 15131 (Sue Striffler Galaski, supervisor, 412-678-6177) on Friday, March 13, 2020 from 3:00 p.m. until 9:00 p.m. and again on Saturday March 14, 2020 from 8:30 a.m. until 9:00 a.m. at the funeral home. Mass of Christian Burial will be held at 9:30 a.m. at St. Michael's Church in Elizabeth. Burial will follow in Mt. Vernon Cemetery.

Geraldine &#8220;Gerry&#8221; Jeannette Sabol, age 96, of McKeesport, PA, died March 11, 2020. She was born in Kissimmee, Florida on March 7, 1924 and is the daughter of the late Samuel Earl and Rose Elizabeth Brownell Kallenbaugh and the beloved... View Obituary & Service Information

The family of Geraldine “Gerry” Jeannette Sabol created this Life Tributes page to make it easy to share your memories.

Send flowers to the Sabol family.