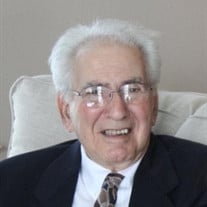 George Tzanakis, age 90, of West Mifflin, passed away on May 1, 2021. He was born on September 18, 1930 in Windsor Heights, West Virginia and is the son of the late Nickola and Antonia Georgelakis Tzanakis. George was born the youngest of six children, also a twin, in Windsor Heights, West Virginia, and first-generation US citizen from Greek immigrant parents. His father was a coal miner in West Virginia while wife Antonia tended to children and home. George was a Veteran of the Korean War, a member of the United States Air Force, where he was a rear gunner on the Convair B-36 Peacekeeper bomber, serving from 1951 to 1954 and earning an honorable discharge as a Staff Sergeant. George then married the love of his life and wife of 64 years, Barbara Bland Tzanakis in 1957. Soon after this his eldest son George Michael followed in 1958. George was a graduate of West Virginia University in 1961, with a Bachelor of Science in Business Administration, remaining a lifelong Mountaineer fan. After graduation he worked at Olin Mathieson in Hannibal, Ohio and lived in New Martinsville, West Virginia. George and his growing family then moved to Washington, PA, where he worked as an industrial engineer with RCA. In 1965 their second child, Mari Michele was born. In 1968, the family moved to Troy, Michigan where he worked for Allied Signal – Bendix. In 1969, while in Michigan, George’s youngest son, Jon Matthew was born. The family moved to their final location in West Mifflin, PA in the fall of 1970. George worked for Westinghouse Transportation (Bombardier) for most of his final years with only a brief break in 1976 where he worked in Erie PA for General Electric. George retired from Bombardier in 2001. George was pre-deceased by his five siblings; Mary Zabetakis, Annie Ledakis, Sophia Vais, John Tzanakis, and his twin sister, Stella Kapsis and his youngest son, Jon Matthew Tzanakis George is survived by his wife Barbara Bland Tzanakis of 64 years, his eldest son George Michael (Barb) of Chippewa Falls, WI, his daughter Mari Michele of Boston, PA, granddaughters Nikki Helland (Kody), Christine Tzanakis, and Lisa Tzanakis, Great granddaughters Harper Helland and Aubrey Helland. He is also survived by many nieces and nephews. Family and friends are welcome at Strifflers of Dravosburg/West Mifflin, 740 Pittsburgh-McKeesport Blvd., Dravosburg, PA 15034 on Tuesday, May 4, 2021 from 3:00 p.m. until 7:00 p.m. Services will be held on Wednesday, May 5, 2021 at 10 a.m. in the funeral home chapel. Burial will follow at Lebanon Church Cemetery with military honors. The family and our team members appreciate that all visitors follow the current CDC guidelines including wearing of masks, social distancing, and capacity limits. We thank you for your cooperation and understanding. The family also wants everyone to know that they completely understand if anyone is not comfortable with visiting and paying their respects during this pandemic. To share a memory or condolence, please visit www.strifflerfuneralhomes.com

George Tzanakis, age 90, of West Mifflin, passed away on May 1, 2021. He was born on September 18, 1930 in Windsor Heights, West Virginia and is the son of the late Nickola and Antonia Georgelakis Tzanakis. George was born the youngest of six... View Obituary & Service Information

The family of George Tzanakis created this Life Tributes page to make it easy to share your memories.

George Tzanakis, age 90, of West Mifflin, passed away on May...

Send flowers to the Tzanakis family.