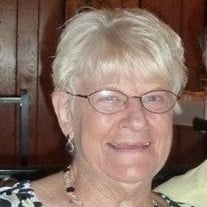 Dorothy Louise Schramm, age 85 of McKeesport, formerly of White Oak, died Thursday, June 8, 2017. She was born in Cumberland, Maryland on September 30, 1931, the daughter of the late Curtis R. and Willomina Mortzfeldt Brant. Dorothy was a member... View Obituary & Service Information

The family of Dorothy Louise Schramm created this Life Tributes page to make it easy to share your memories.

Send flowers to the Schramm family.