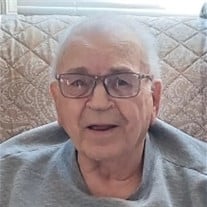 Alan Darrell Cox, age 86, of Penn Township, formerly of North Huntingdon, died on Wednesday, April 20, 2022. He was born in McKeesport on December 2, 1935 and is the son of the late Albert Spear and Hazel Schoeller Cox and the husband of the late Janet Marie Thompson Cox. He was in the drafting program while at McKeesport Vocational High School. During peacetime, he served with the United States Army Reserves for six years during peacetime. He was employed at Westinghouse in Trafford as a draftsman/tool designer, then as a school bus driver for Penn Trafford School District and Greensburg Central Catholic High School, and retired from Tooling Specialists in Latrobe. He was a member of First Christian Church in McKeesport, a former member of the Keystone Church in Export, and Norwin Christian Church, while working as the maintenance director. He was also a member of the Civil Air Patrol, a Boy Scout Leader in North Huntingdon, and an original member of the Rescue 8 Ambulance in North Huntingdon. He is survived by daughter, Susan Cox of North Versailles; son, David (Michele) Cox of Orting, WA; stepsons, Donald (Jeanine) Snider of Scottsdale, PA; Daniel (Julie) Snider of Jamestown, SC; stepdaughter, Denise (Jerry) Eisaman of Elizabeth; eight grandchildren; twelve great-grandchildren; sisters, Mary Jane Dewyer of White Oak; Ruth Armstrong of Glenshaw; Martha Kamerer of Bethal Park; and Peggy (Jack) Murray of White Oak. In addition to his parents and wife, Alan was preceded in death by his brothers, John Cox; William Cox; and Roy Cox. Family and friends will gather at Strifflers of White Oak Cremation and Mortuary Services, 1100 Lincoln Way, White Oak, PA 15131 (Sue Striffler Galaski, supervisor, 412-678-6177) on Friday, April 22, 2022 from 3:00 p.m. until 7:00 p.m., when services will be held in the funeral home chapel with Pastor Ray Beard officiating. To share a memory or condolence, please visit www.strifflerfuneralhomes.com

Alan Darrell Cox, age 86, of Penn Township, formerly of North Huntingdon, died on Wednesday, April 20, 2022. He was born in McKeesport on December 2, 1935 and is the son of the late Albert Spear and Hazel Schoeller Cox and the husband of the... View Obituary & Service Information

The family of Alan Darrell Cox created this Life Tributes page to make it easy to share your memories.

Send flowers to the Cox family.